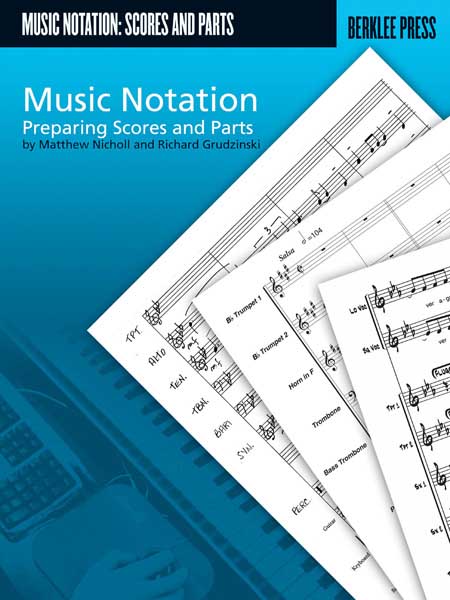 Whether you notate music by hand or use computer software, this practical reference will show you today's best practices for how to render the details of your scores and parts. Improve your music's legibility and express your ideas clearly to get the best possible representation of your music.

You will learn to:

.Create scores that are easy to conduct and parts that are easy to perform
.Understand the unique practices and standards for handwritten vs. computer-generated scores, such as those by Finale® and Sibelius®
.Lay out scores with proper instrument order, measures per page, and common alignment practices
.Understand the publication standards for orchestral, big-band, vocal, and rhythm-section–based scores
.Use appropriate practices for different styles, such as pop, commercial, classical, and jazz
.Master the details of setting notation elements such as measure numbers, rehearsal markings, chord symbols, dynamics, lyrics, and many more
.Use specialized notation, such as measure repeats, col, slashes, hits over time, and others

Music Notation: Preparing Scores and Parts is used as a notation textbook by Berklee College of Music's Contemporary Writing and Production Department. It presents the definitive word in score and part preparation, based on contemporary publishing-industry practice.

Matthew Nicholl is Chair of the Contemporary Writing and Production Department at Berklee College of Music. He has composed soundtracks for films by the National Geographic Society, NASA, the US Postal Service, the Marriott Corporation, and Blue Cross/Blue Shield, and scored station ID and promotional packages for PBS as well as numerous local television and radio stations. He has provided music for the national advertising campaigns of Maybelline, Radio Shack, Subway Sub Shops, and United Way. He also composed scores to TV spots for the presidential campaigns of Bob Dole, Michael Dukakis, and George H.W. Bush. His music has appeared in a number of TV shows, including One Life to Live.

Richard Grudzinski is an associate professor at the Berklee College of Music, where he has taught since 1985. He teaches arranging, music preparation and music technology/production courses in the Contemporary Writing & Production department. He is an active composer, arranger, and keyboardist.

Grudzinski has worked on many projects as a music copyist, including the 1983 Academy Awards show, several records for the New Kids on the Block, and many musicals such as Marty (music by Charles Strousse) and Seussical—The Musical. He also worked as MIDI editor/copyist for an audio book version of The Polar Express (music by Michael Moss), which was nominated for a Grammy in the spoken word category, and was a copyist for jazz composer George Russell as well as others, including Berklee faculty and the Boston Pops Orchestra. Grudzinski has also worked as an orchestrator/copyist on many projects, including the Huntington Hartford Theatre's production of The Mikado.

"Music Notation: Preparing Scores and Parts is a must-have book for both professional and beginning composers and arrangers. It is a completely up-to-date and thorough treatment of the subject and includes all of the latest practices for both computer-assisted and handwritten notation. It is the most comprehensive book on this topic I have seen, and it is written and laid out in a clear and easily readable style. I endorse this superb book as a required text at Berklee, and highly recommend it to anyone aspiring to be a composer or arranger."

"What's often missing in composers' training is the correct, professional way to prepare scores and parts. Fortunately, this much-needed new tome by Matthew Nicholl and Richard Grudzinski 'fills in the blanks' about music notation. It's an inspiring and well-organized presentation, with clear and concise explanations pertaining to the most vexing notation problems. All composers should place this book at the top of their next-to-read list."

"This quality, in-depth tutorial encompasses all you need to know regarding the preparation of scores and parts. These valuable guidelines will help you to write clear scores, facilitating better performances and recordings, and saving you time and money. This comprehensive work is a 'must have' for all composers, arrangers, and copyists."

"A clean and precise part or score is essential—an intrinsic element of any music production or performance. Recently, I worked closely with Richard Grudzinski on one of my own scores, and I witnessed first-hand his expertise in turning my musical thoughts and intentions into artistry, in a clean and cogent music preparation. This book is invaluable for anyone interested in communicating their musical language precisely and intelligibly through music notation."